Nothing new under the solarisation

This weekend we went to the Muybridge Exhibition at Tate Britain, now sadly closed. Eadward Muybridge is most well known for his pioneering work in Victorian stop-motion photography: think multiple miniatures of horses, naked runners and people boxing. But before that work he produced lots of beautiful photography.

The most obvious crowd-pleasers should have been the stereographs, but the Tate hung them rather badly, with most of the pairs of glasses you could use to help see them having been yanked off their strings, and the images themselves far too far apart for my eye separation. What was more engaging was looking at his “ordinary” photography and realising how much Muybridge’s experimentation was really manual, 19th-century versions of well-used digital, 21st-century special effects. Here are three examples, with the modern version first.

1. HDR imaging. This is where photographs of different exposure times are combined, to maximise the contrast of every component of the screen. It tends to lead to midtones being pushed very much towards either highlights or shadows, and lends a dramatic, brooding air to a photograph: 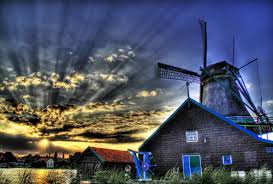 The above composition aside, the HDR effect is a somewhat overused firework these days: something everyone seems to be letting off to add drama to an otherwise uninspiring composition. Muybridge was doing it because he was almost forced to: the long exposure times of early photography would often completely white-out the sky before you could get the smallest details of something in silhouette.

2. Long exposures, including using ND filters. Muybridge and others realised that long exposure times would turn water surfaces with gentle ripples into crystal-clear mirrors. In fact, some of Muybridge’s lake scenes are photographs more of the reflection than the original, to demonstrate this. Rougher waters, such as those encountered during his surveying of American lighthouses, become blurred but flat surfaces, while areas of heavy surf start to look like they have a clinging, eerie mist. 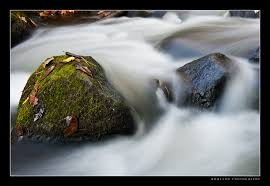 These days ND filters are used to permit long exposures of daylight scenes, giving the silky water effects seen above. But again, Muybridge was turning a vice into a virtue; and again, he often spliced photos together to get a convincing sky, sometimes even re-using cloud formations.

An obvious one here, but whereas digital stitching can often gently stretch the component photographs to avoid unsightly joins, Muybridge’s stitching was literally that: the binding of a book.

The notion of a journeyman pursuit combining with formal constraints to produce works of art is nothing new. But what’s more interesting is that some of those formal constraints seem to become over time rather standard effects. It’s as though enabling technology reinvents itself: first as difficulty, then as play.